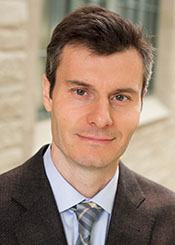 In addition to this new role, Backman, the Walter Dill Scott Professor of Biomedical Engineering at the McCormick School of Engineering and Applied Sciences, will continue to serve as Leader of the Cancer and Physical Sciences (CAPS) Program at the Lurie Cancer Center.

As Associate Director, Backman will oversee Lurie Cancer Center’s infrastructure for interdisciplinary programs and initiatives, which include the center’s 15 Shared Resources that foster basic, clinical and translational research. He will also lead the development of innovative tools, technologies and services to support emerging disciplines across the cancer center.

Backman succeeds Milan Mrksich, PhD, the Henry Wade Rogers Professor, who was recently named Northwestern University’s interim vice president for research. “Dr. Backman’s appointment as Associate Director is wonderful news for the Lurie Cancer Center. Throughout his career, Vadim has been an innovator in bringing his extraordinary engineering background to develop imaging technologies that are redefining the power of cancer diagnostics,” said Mrksich. “His multidisciplinary understanding of research technologies and familiarity with the center’s programs make him the ideal candidate to oversee research technologies and infrastructure.”

An internationally-renowned expert in biomedical optics, Backman has developed numerous novel imaging technologies. Through his nanocytology technique, he developed a simple, easy-to-use test for diagnosing multiple forms of cancer at the earliest stage of disease formation. Backman, who leads Northwestern’s new Center for Physical Genomics and Engineering, is now advancing an entirely new field using breakthrough optical imaging and computational genomics to reprogram the genome's chromatin, which regulates gene expression.

“Vadim is a brilliant researcher and his work is transforming many areas of oncology and cancer research,” said Leonidas Platanias, MD, PhD, director of the Lurie Cancer Center. “Under his strong leadership, the CAPS program has been ranked by the NCI as “exceptional,” providing a valuable national resource for physical sciences-based approaches to cancer research. I very much look forward to working with him in this new role.”

Backman received his PhD in Engineering and Medical Physics from Harvard University and Massachusetts Institute of Technology (MIT). His numerous awards include being selected as one of the top 100 young innovators in the world by MIT Technology Review Magazine and the Cozzarelli Prize from the National Academy of Sciences. He has served on multiple NIH and NSF review panels, and chairs various scientific conferences such as OSA Biomed and SPIE Biomedical Applications of Light Scattering. Backman has published more than 225 papers in peer-reviewed journals including Nature, Nature Medicine, PNAS, and Physical Review Letters, and holds over 20 patents.