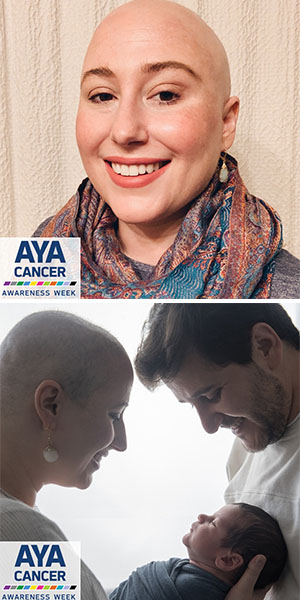 Breast Cancer? You can be pregnant and have cancer? Am I the only person this has ever happened to? Surely, they had mixed my results up with someone else, right?

My name is Ashli and I was diagnosed with Stage II Breast Cancer on June 13th, 2019 at 29 years old, and for the real kicker, while I was heading into my 26th week of pregnancy. I did not have a family history of breast cancer (or cancer in general), so when I discovered a lump in my breast, I chalked it up to pregnancy; just another part of all the beautiful but weird things that come along with it. I mentioned it to my obstetrician, Northwestern Medicine’s Anjali Mehta, MD, and she immediately sent me to Lynn Sage Comprehensive Breast Center to get it checked out. Cancer was still not even on my radar. What I thought was going to be a quick ultrasound turned into a mammogram and then a biopsy. As I was getting my biopsy, deep down I knew something was wrong. I squeaked out, "Is my baby going to be okay?" and the team all assured me he would be. When I left the building, I went straight to the sidewalk outside of Lurie Children’s Hospital and - once the sidewalk had cleared - I sobbed. I got the call the next day.

I was thrust into the cancer world. If you had asked me what an oncologist specializes in two days before, I couldn’t have told you. Northwestern Medicine immediately assembled a team for me: Dr. Lisa Flaum, Dr. Swati Kulkarni, Dr. Whitney You, and Dr.  Anjali Mehta, who showed incredible care and compassion. I knew I was in the right place. I was too far along to have surgery and my team suggested chemotherapy as the first line of treatment. Apparently, you can do chemotherapy while pregnant, another thing I had no idea was possible - and honestly the wildest thing I had ever heard. It was possible, though, and my team assured me that it was safe and that my son would be just fine. I had not been and was not the only person in this kind of situation. I previously had the feeling that I was an anomaly. On July 3rd, my husband and I showed up to Prentice Women’s Hospital for my first round of chemotherapy and my first time to stay in a hospital. I did two more rounds of chemotherapy while I was pregnant. On September 10th, after 24 hours of labor, I gave birth to our beautiful and healthy son; it was nothing short of magical. Two weeks later I was back in the infusion room for my fourth chemotherapy treatment. Four rounds later, on November 19th, I finished my last round of chemotherapy. With family and friends surrounding us, my son and I (gently and quietly), rang the gong. He cried, I laughed. In January, I had a unilateral mastectomy and then transitioned into survivorship, which I am currently navigating as I type this.