The endocrine system consists of cells that produce hormones. Hormones are chemical substances that are formed in the body and carried in the bloodstream to have a specific regulatory effect on the activity of other organs or cells in the body. For example, a component of the pancreas is made up of specialized cells clustered together in islands within the organ, called islets of Langerhans. These cells produce multiple hormones, the most critical one being insulin, which is a substance that helps control the amount of sugar in the blood.

In addition, a neuroendocrine tumor originates from the hormone-producing cells, specifically those cells of the neuroendocrine system. The neuroendocrine system consists of cells that are a cross between traditional endocrine cells (or hormone-producing cells) and nerve cells. Neuroendocrine cells are found throughout the body in organs, such as the lungs and gastrointestinal tract, and perform specific functions, such as regulating the air and blood flow through the lungs and controlling the speed at which food is moved through the gastrointestinal tract.

Our experts work together in a multidisciplinary team (including dedicated, talented nursing staff and Lurie Cancer Center’s Supportive Oncology Team) to help create a comprehensive, individualized treatment plan and provide you with exceptional support. Get to know our physicians and the many other experts who will play an important role in your care.

The Lurie Cancer Center is typically involved in more than 300 clinical trials at a given time, covering a broad range of subjects that may be relevant to your diagnosis. Browse our clinical trials to participate and help test new treatments.

We offer a number of services to help patients and their families cope with the challenges of cancer treatment.

see all our support services 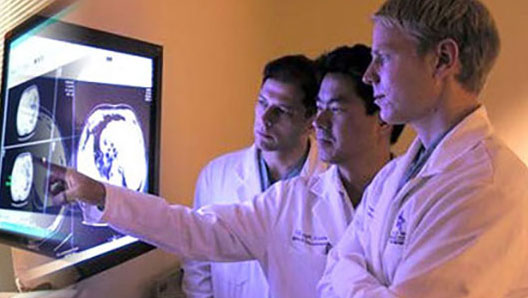 The Neuroendocrine Tumor Program of the Lurie Cancer Center at Northwestern Memorial Hospital provides leading-edge treatment and follow-up care for all types and grades of neuroendocrine tumors (NETS) of the gastrointestinal tract and pancreas.

Your support takes our research further.Donate & Volunteer
Back to top