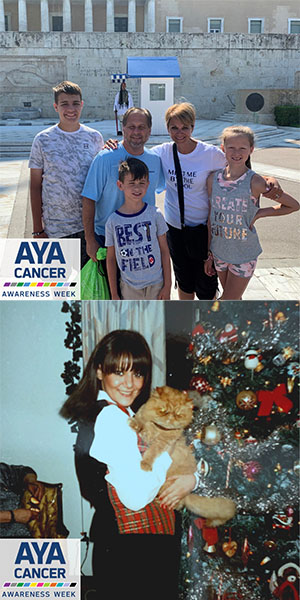 Being young is a challenge—hormones, school, life—but nothing was more challenging than when I was told I had cancer, Hodgkin’s Lymphoma. I was 16 and a senior in high school, ready to have the best year of my life; but instead the hospital became a second home. After months of radiation and surgeries, I was finally on the road to recovery and planning my summer and my college years. I went onto college and graduated, but soon the “C” word would enter into my life again. This time it wasn’t Hodgkin’s. It was breast cancer caused by the treatment I received for the Hodgkin’s. Doesn’t make sense right? The treatment that put me into remission caused another cancer to grow. When I was diagnosed, they told me my breast cancer was stage 3 and very advanced. I was going to need months of chemotherapy and radiation again. So here I am, 22, just started a career in TV and now my life has been turned upside down. My treatment lasted over a year, including all of the surgeries and reconstruction.

I was finally putting the pieces of my life back together. I started dating and even made some career changes when I found out it may be very challenging to have children biologically and that was tough for me. I was single and often wondered what the conversation would look like when I met someone and I got butterflies in my stomach. How can I tell them that I may not be able to have children? When do I tell them?  Do I tell them when we are really serious or when we’re on our first date? Do I even tell them I had cancer not once but twice?  Well, I finally found my own algorithm and one day I met my Prince Charming. I got married when I was 29, twelve years after being diagnosed with Hodgkin’s and seven years after being diagnosed with breast cancer.

We went through the fertility roller coaster with artificial insemination, in-vitro fertilization and even attempted a second round of in-vitro fertilization with donor eggs. Nothing was working. As we were leaving another disappointing visit my husband said to me, “Let’s adopt”. And at that point we started on another type of crusade to start our family. A year later we became parents of a bouncing baby boy. We were in love and truly were blessed. After a few years we knew we wanted to continue to grow our family, and learned about embryo adoption. This is where couples that go through in-vitro fertilization may have extra embryos after they themselves had successful pregnancies and are willing to anonymously donate their embryos to infertile couples. I am happy to report I got pregnant not once, but twice through embryo adoption. We now are a family of five. I often hear many young patients who are frustrated or not sure what’s going to happen later in life when and if they decide to try to have children. I am here to tell you there are so many more options and resources today than there were even a few years ago I hope sharing my story helps encourage you in yours.