My Path to Motherhood 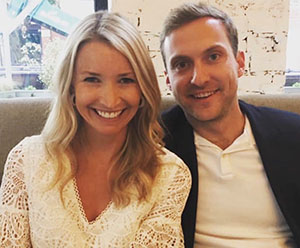 My cancer story began in the middle of my junior year of college, in 2009. My college experience was rather ordinary up until this point, filled with friends, studying, and ahem, beer. But, after experiencing instances of rectal bleeding and bloating, my PCP ordered a colonoscopy, which resulted in the surprising diagnosis of Stage IV Rectal Cancer.  This became a defining point in my life, separating my life into B.C. (before cancer), and A.D. (after diagnosis). Life A.D. is fraught with complications at almost every turn, including building a family. Let me share what my path to motherhood has looked like thus far.

Because my cancer was so advanced at the time of diagnosis, we had to move fast with starting treatment. I immediately started on oral chemotherapy, and shortly after began proton radiation.  We didn’t have time for any fertility-sparing measures, other than pinning my ovaries up out of the field of radiation. But my doctors made sure to explain that this would likely not help much to preserve my fertility, since I would be undergoing ample systemic chemotherapy as well. Being able to have biological children was the least of my worries at that point, and I knew that I would find a way to have a family one way or another whenever the time came. Well, the time has come.

While I’ve never had a problem with the fact that I’ll never have a biological child of my own, I have struggled with the fact that I have to go through such a long and taxing process just to have what so many others can have easily (on top of everything I’ve already been through!). There have been many days filled with tears of frustration and sadness. There are times when I see pregnant women and feel intense jealousy. I have to check myself and realize that I can feel two competing emotions at the same time, such as sadness or jealousy, but also happiness that a friend is pregnant.

My husband and I began the process of starting our family almost two years ago. A fertility specialist had already confirmed that I don’t have any eggs to use, so when we embarked on the journey to parenthood, we knew we would need an egg donor. I also cannot carry a child, because of all the abdominal surgeries I’ve had and the layers and layers of scar tissue they left behind. So, as we began our search for an egg donor, we also had to begin thinking about the gestational carrier (G.C.) portion of the process.

Through our agency, we found a fantastic, anonymous egg donor who somewhat resembles me. She did a cycle of IVF, and while we retrieved a number of eggs, we only ended up with one genetically normal embryo. I was disappointed and saddened by this news; it just didn’t feel fair. This was the first major let-down of the process. My husband and I want multiple children, ideally with the same genetic background. There is also the chance that the first embryo transfer won’t result in a pregnancy or birth, so we would need a backup embryo in case of that. Luckily the donor agreed to do another cycle for us, in hopes of banking more good embryos. But this isn’t a quick process; she finally did the second cycle, almost one full year after the first one. All of the legal work, the FDA clearance, and the doctor checkups take time. The good news is, we ended up with 3 additional normal embryos!! To say we’re relieved is an understatement!

We simultaneously set up the second round with our egg donor and began the search for our G.C. We went through in-depth interviews with the matching team at the agency, to learn our preferences, expectations, and priorities for our G.C. journey. We were told the average time until they find a good match for us would be two months. At the two-month mark, we got hit with awful news; there is a nationwide G.C. shortage! It was almost comical; it felt like nothing could just go the way it was supposed to. The path to motherhood kept winding, and it felt like it was all uphill. But, there was nothing we could do except be patient, and try to stay hopeful (wayyy easier said than done-I threw myself a few pity parties).

Then, two weeks ago, we got the best email—they found a match for us! We viewed her profile, she viewed ours (seriously like a really good dating app) and we both agreed to meet via video call. It felt like we were preparing for the most important date of our lives; we were both so nervous! But it went off without a hitch. Our match is lovely, and it just felt right.  We officially decided to work with each other; I am still riding high on this news! But of course, there are many steps that need to take place before they will transfer one of our embryos and hope for a pregnancy, i.e., the legal piece, medical workups, insurance policies, etc etc. So, the journey continues. I’m sure there will be more bumps in the road, but the hope that we will be holding a beautiful baby girl (yes we’re choosing which sex embryo we want to implant) by the end of 2022 is keeping us going!