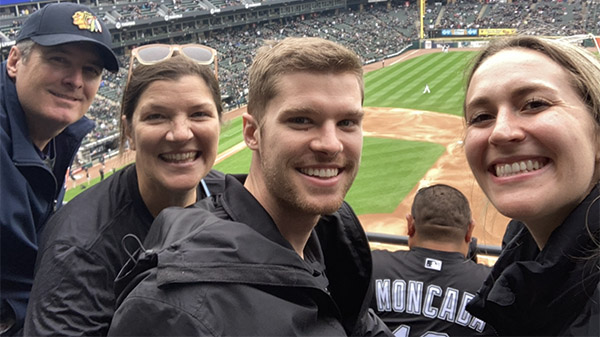 My role as a caregiver for someone with cancer is one I have had several times. The first two involved supporting my mother and father, as they, respectively, battled colon and lung cancer. Each have their own humbling story, as each cancer patient has their own story. My third experience in this role was one I never expected. Not that I ever expected the previous two, but, in my opinion, cancer in aging people is not as shocking as it is when a child or young adult is thrown into that world. I found myself in that world the third time.

First, my name is Candice and my son is Brad. Having received Brad’s permission, I’ll give you a little backstory of how we got here.  In 2018, Brad had just graduated from the University of Illinois, took a celebration trip to Southeast Asia with some college friends and came back to begin his career, involved in clinical trials at a pharmaceutical company.  We did find that quite ironic as the future unfolded. My husband and I both just recently retired and moved to the next town over, from our home of 26 years.  We were all getting ready to embrace new steps in our lives.  After some unusual situations, Brad ended up in the ER, diagnosed with a grade 2, astrocytoma brain tumor. I know his world was rocked, as was all of ours around him.

So now to my “Caregiver” role.  And I put that in quotes because, myself, sometimes I struggle with that particular word.  Brad was 23 when this happened. Prime time for him to be shedding his “caregivers” and continue to be independently taking care of himself.  I seriously make a motion to give us a new title…how about “support team” Think about it.

Without going into day-by-day details, I’m going to try and summarize some of my feelings supporting my young adult through his cancer journey. My first instinct, and probably my response, was to take charge. I wanted to figure it all out and fix it. In my eyes, this was no longer my 23-year-old son. I was looking at my 6-year-old.  And I thought my job, once again, was to make it better. Days turned into hospital stays, major decisions, surgeries and always a few blips, I knew I was no longer taking care of my 6-year-old. The conversations we were having were obviously serious, and Brad is not one to sit around and listen to everyone else decide what he should do. Not only do our young adults want an active role in this journey, I feel it is best for all of us, when they do.  I think at this point, I realized I needed to be asking thought-provoking questions instead of giving directions to my young adult. Decisions would be ultimately up to him.

Brad’s “support team” was a blessing for us. It included his parents, his girlfriend of 6 years, who is now his wife, his two sisters and their partners. My first thought was we were all going to charge in wherever we had to charge into and fix it all. But I soon realized the best support staff follows a good leader. And Brad was our good leader.

I’ll also admit, my vision of this team at first was Mom, Dad at the top, and the kids and their partners following our directions. But then I saw I was teaming up with 6 intelligent, caring, young adults, who brought so much to our team in many different ways.  Partnered with our Lurie Cancer Center doctors at Northwestern Medicine, adding their incredible expertise and knowledge in bringing the comfort we needed, I was no longer in charge and did not need to be. I just needed to be part of the support team. And that in itself, brings a type of comfort.

Brad and his girlfriend had been dating since high school.  We literally watched them grow up together. This is someone who loves my son as much as I do.  This was a moment in time, neither of us ever envisioned supporting Brad through. But here we were. I was now talking to my son’s girlfriend about who was going to spend the night with him at the hospital, who was going to be in the ICU when he got out of surgery, and wondering myself, who Brad was going to confide in with his thoughts.  Hard stuff as a mom. And I’m thinking probably hard stuff as the girlfriend at the time. We got through it. And the words that come to mind in getting through it are: respect, empathy, communication and love. She is now my daughter-in-law. How lucky am I? Am I happy we had that experience together, growing our relationship due to the circumstances?? NOPE. But we did. Would we have had a solid relationship if we did not have that experience together?? YEP. But then, again, here we are. We are just taking those experiences and using them to build. We are not done being the support team. It’s definitely a different dynamic.  Brad is married, living with his wife in the city.  But as long as we stick to the original words: respect, empathy, communication and love, I think that’s a good base. I’m thankful and grateful, to still be part of the team. But am continually learning where I fit in.

Looking back, I think I might say that the hospital stay was the easiest part of my support role. Because after that, my young adult had to come back and live with his parents. That was not in the plan.  I think I kind of welcomed it! Again, I was planning on taking care of Brad and getting him anything and everything he needed. I might’ve seen that 6-year-old a few more times again and found myself in “fix-it” mode again.  My support role had to be re-evaluated again. But you know why? Because I assumed I knew what he needed.  I forgot to ask questions. I forgot he was a 23-year-old young adult who knew when and what he wanted to eat, knew if he should or should not go out, knew that he could promptly and consistently take meds without me checking in. It was hard for me. And it took conscious effort for me to come to terms with it.  Trust was my new word.

I was not always strong. And I’m still not. But I feared being weak in front of Brad. I never wanted him to think I was worried about a certain test, treatment, or anything else. In doing so, I think I shut the door on communication and transparency. Cancer possibly became that “elephant in the room”.  I sought out counseling in Living Well Cancer center in our community, which also by the way, led our family to the AYA program. The thing that stands out for me, during that time, is when I explained to my counselor that I never wanted to show Brad my weakness. I never wanted him to know that I cried.  You know what she said? “Why?” I really had no good answer. And then she said, “he probably already knows”.  And she suggested I go and share my feelings with Brad. I did. And it helped me a lot. I think it helped us both. I truly look at that as a pivotal point for me in this journey and it has guided me in the future.

When you are part of a support team for someone with cancer, it’s sometimes hard to even use the word “I”.  All I wanted to think about was what Brad needed. All “I” needed was for my son to be better, at any cost to my own well-being. But in time, and with help, I realized in helping him accomplish that, “I” also needed to be my best self. I needed to be mentally present, healthy, and on top of my game. Brad’s support staff was the rock of positivity, throughout surgery, treatments, and scans.  And again, Brad was the leader.  I found myself in the “what if” state of mind more than I should have.  But today I am here to attest when you take care of yourself, and are surrounded by positivity and hope, it also becomes your mantra.

Taking care of “I” is continuous and mindful work. And it changes throughout various stages of life. Whether those stages bring in sickness, age, or lifestyle, I try to constantly adjust.  Surrounding yourself with the people and opportunities you need during those times is key. Right now I need to surround myself with family, good friends, organizations like The American Brain Tumor Association and AYA.  I believe being involved in the AYA groups has brought a new communication level within our family. I know it has for me.  Whether I’m listening to someone else share their thoughts, or expressing my own, I find myself always coming away with some new perspective. They all help me get to my best self. And my best self, is always part of some bigger team. So thank all of you for being there, sharing your stories. I sometimes don’t give myself credit for thinking I might’ve shared something thought provoking in our groups. But maybe I do. You do too!! Thank you for allowing me to share my story.