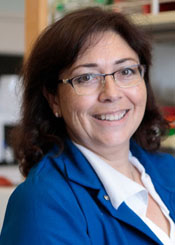 Luisa Iruela-Arispe, PhD, an internationally recognized vascular biologist, has been named co-leader of the Tumor Environment and Metastasis (TEAM) Program at the Robert H. Lurie Comprehensive Cancer Center of Northwestern University. The goal of the TEAM Program is to elucidate how interactions between tumor cells, immune cells, and components of the host stromal microenvironment impact tumor development and progression.

Iruela-Arispe is Chair of the Department of Cell and Developmental Biology and the Stephen Walter Ranson Professor. Her research focuses on the signaling pathways that regulate vascular morphogenesis during development and pathological settings. Her current cancer research interests include the molecular mechanisms that result in the emergence of angiosarcomas and the cross-talk between endothelial and tumor cells in the process of metastasis.

“I am thrilled to join the leadership of the Lurie Cancer Center and contribute to our efforts to improve early detection and treatment of cancer,” said Iruela-Arispe. In collaboration with TEAM Co-Leader, Hidayatullah Munshi, MD, she will help advance efforts to translate basic science discoveries from the TEAM Program into clinical practice.

“Luisa’s strong leadership and expertise will strengthen the TEAM program in a major way. I look forward to working with her,” said Leonidas Platanias, MD, PhD, director of the Lurie Cancer Center. “I would also like to thank Carole LaBonne for her service and contributions to the program.”