Myeloma is a cancer of the plasma cells in the bone marrow, the spongy tissue inside of bones. Plasma cells are a part of the body's immune system and produce antibodies that help the body fight infection. Abnormal plasma cells can suppress the growth of other cells in the bone that produce red blood cells, white blood cells and platelets. This suppression may result in anemia (from a shortage of red blood cells), excessive bleeding from cuts (from a shortage of platelets) and a decreased ability to fight infection (from a shortage of white blood cells). Myeloma often causes structural bone damage resulting in painful fractures. Like regular plasma cells, myeloma cells can produce antibodies. However, as the myeloma cells grow uncontrollably, there is overproduction of antibodies, leading to an accumulation in the blood and urine that may cause kidney and other organ damage.

Myeloma is often called multiple myeloma because most people (90 percent) have multiple bone lesions at the time it is diagnosed. Solitary plasmacytoma is a mass of myeloma cells that involve only one site in the bone or other organs (most commonly the upper respiratory tract, including the nose and throat). Extramedullary plasmacytoma describes myeloma that started outside of the bone marrow, such as the lymph glands, sinuses, throat, liver or under the skin.

Our experts work together in a multidisciplinary team (including dedicated, talented nursing staff and Lurie Cancer Center’s Supportive Oncology Team) to help create a comprehensive, individualized treatment plan and provide you with exceptional support. Get to know our physicians and the many other experts who will play an important role in your care.
meet the experts

The Lurie Cancer Center is typically involved in more than 300 clinical trials at a given time, covering a broad range of subjects that may be relevant to your diagnosis. Browse our clinical trials to participate and help test new treatments.
find related clinical trials

We offer a number of services to help patients and their families cope with the challenges of cancer treatment.

see all our support services 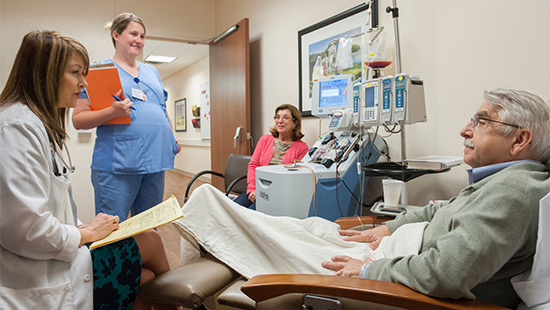 Our Hematopoietic Stem Cell Transplant Program is the leader in volume and types of transplants, averaging over 250 transplantations per year, resulting in survival rates consistently exceeding the national survival rate.

Your support takes our research further.

Donate & Volunteer
Back to top