The Center for Advanced Microscopy exists to provide training, access, support and expertise to our user base in the area of microscopy. Our goal is to provide excellent technical support in a collaborative environment, facilitating access to cutting edge microscopy instrumentation. We support light microscopy and electron microscopy across the whole range of spatial scales from whole organisms to single molecules. Our recharge structure includes both fee-for-service work and instrument access charges. We charge for services, such as electron microscopy sample preparation and "assisted imaging" sessions, as well as user training and instrument time. We continually strive to provide our users with better instruction and guidance, as well as to ensure that our instrumentation is the best available and properly maintained. 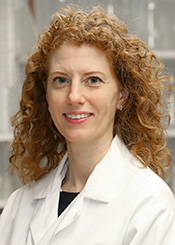 Kathy Green’s (TEAM) laboratory works on the role of cadherin-based cell-cell junctions called desmosomes in maintaining tissue homeostasis and is delineating how interference with their functions promotes cancer progression. In 2015 Dr. Green’s group published an article in the Journal of Cell Biologythat unveiled a novel role for protein arginine methylation in facilitating phosphorylation of the desmosomal protein desmoplakin to regulate junction dynamics.  Interference with this pathway disrupts the ability of skin cancer cells to modulate adhesion strength in response to environmental stimuli. This article included FRAP data (Fig 1) acquired with the spinning disk confocal microscope in our facility and was selected for the journal cover. This work was supported by R01s AR041836, AR43380, GM037537, CA122151.
Reference: Albrecht et al. GSK3- and PRMT-1-dependent modifications of desmoplakin control desmoplakin-cytoskeleton dynamics. J Cell Biol. 208:597-612, 2015)

The lab of Colby Thaxton (TRIST) focuses on the development of nanomaterials for diagnostic and therapeutic applications, particularly relevant to cancer. This example was published in the high impact journal PNAS and includes TEM of HDL-NP in lymphoma cells that was performed in CAM. This paper represents an output from a collaboration between two LCC Members from different themes Thaxton and Gordon (HM).
Reference: Yang et al. Biomimetic, synthetic HDL nanostructures for lymphoma. Proc Natl Acad Sci U S A 110:2511-2516, 2013.

Vladimir Gelfand (TEAM) studies the cytoskeleton in malignant cells and is active in the development and application of advanced microscopy technologies. A 2015 paper (also the cover article) from his laboratory in the journal Molecular Biology of the Cell made extensive use of CAM instrumentation to study vimentin intermediate filament transport and subunit exchange. Transport of filaments (Fig. 2) was studied using both live-cell structured illumination microscopy and total internal reflection fluorescence microscopy. Subunit exchange in filaments was examined by long-term imaging after photo-conversion. The many contributions to this study by CAM were acknowledged, as was an instrumentation grant (1S10OD016342) that supported the purchase of the Nikon SIM system. This work was supported by a program project grant, P01GM09697.
Reference: Hookway et al. Microtubule-dependent transport and dynamics of vimentin intermediate filaments. Mol Biol Cell. 26:1675-86, 2015.

Dr. Platanias’s (MOM) laboratory studies the role of Schlafen (SLFN) proteins in different malignancies. In collaboration with Dr. Munshi’s (TEAM) group, they examined the role of human SLFN5 in the regulation of motility and invasiveness of renal cell carcinoma (RCC) cells. Â The investigators found that SLFN5 controls motility and invasiveness of RCC cells by regulating the expression of matrix metalloproteinase 1 gene (MMP-1), MMP-13, and several other specific genes. Â Importantly, they demonstrated that expression of SLFN5 correlates with a better overall survival in a large cohort of patients with RCC. The use of CAM was critical for the success of this work. Live-cell imaging to track migratory behavior was performed on a Nikon Biostation IM-Q Cell-S2 incubator wide-field microscope. The data provided by CAM contributed to this publication, which was supported by R01 grants CA161196, CA77816, and CA155566.
Reference: Sassano et al. Human Schlafen 5 (SLFN5) Is a Regulator of Motility and Invasiveness of Renal Cell Carcinoma Cells. Mol Cell. Biol 35:2684-2698, 2015.

Dr. Peng Ji’s laboratory focuses on the regulation of mammalian erythropoiesis, in particular erythroid cell terminal differentiation and hematopoietic stem cell biology. In 2015, Dr. Ji’s lab reported in the journal Developmental Cell their findings of a transient and recurrent opening of the nucleus, through which histones are extruded during nuclear and chromosomal condensation, during terminal erythropoiesis. This opening was visualized through live-cell 3D confocal microscopy in suspension cells (Fig 4), an extremely technically challenging imaging procedure. Dr. Ji’s findings may have implications for the development of myelosysplastic syndromes, in which a failure of the nuclei to condense is one of the key features of dyserythropoiesis. This study, a collaboration between two LCC members from different programs, Ji (HEM) and Rappoport (MOM), was supported in part by LCC’s Physical Sciences-Oncology Center (U54CA143869).
Reference: Zhao et al. Nuclear Condensation during Mouse Erythropoiesis Requires Caspase-3-Mediated Nuclear Opening. Dev Cell. 36:498-510, 2016.

All manuscripts and grants presenting work supported by this core should include the following acknowledgement:

For example, if a user uses the PALM system, then the acknowledgment should read:

Users should also send a PDF copy of the papers they publish to Constadina (Dina) Arvanitis, PhD.